I'm a Colorado-based destination elopement photographer who helps couples have unforgettable elopements in the Rocky Mountains and destinations worldwide.

Everything about this day was meant to be! Jordan and Isaiah are massive dog lovers who first found me through some photos that went viral several years ago. When they decided they wanted to elope and went looking for a Colorado elopement photographer they hunted me down – and I’m so glad they did! From the moment we hopped on the phone to chat about their elopement I knew this would be the kind of day I absolutely had to be a part of!

These two grew up in the same town and – unbeknownst to each other – were each other’s crushes through middle and high school! Nothing ever came of it though and after graduation life moved on. Fast forward several years and a lot of living and they reunited, fell in love, and realized they were meant to be each other’s people ALL along. It’s the sweetest story complete with a couple kids and one very spoiled dog named Dagger (who they’re going to have to bring next time they come out to Colorado!).

As a side note, I actually got to “meet” one of their kiddos when we had a Zoom call during quarantine to talk about their elopement and my kid and their kid spent a good ten minutes showing each other their various favorite toys which was pretty much the cutest thing ever!

These two are super laid back and this was one of the easiest days ever to plan. Jordan absolutely loved some photos I took last year at a cave in the mountains so we built their day around making a stop there (although the rest of the day was completely different!)! We had a loose itinerary that involved some exploring, some hiking, and a good bit of time just enjoying the view – and it all turned out perfect.

I met up with these two at the hotel in the mountains where they were finishing up getting ready (with some help from Kim J Beauty). Jordan had told me she would be wearing a black wedding dress (um, yes please!) and I was pretty much blown away when I saw how incredible this thing was!

The whole vibe was very much dark Elsa and I was 100% there for it!

After they were ready we loaded up my camper van and headed out for an adventure! The plan was VERY loose – we had a general idea of where we were headed but mostly decided to just stop along the way at awesome spots and see how the day went! We found a beautiful spot along our drive and decided it would be perfect for their first look (they were separated by a curtain in the van!) and a picnic. 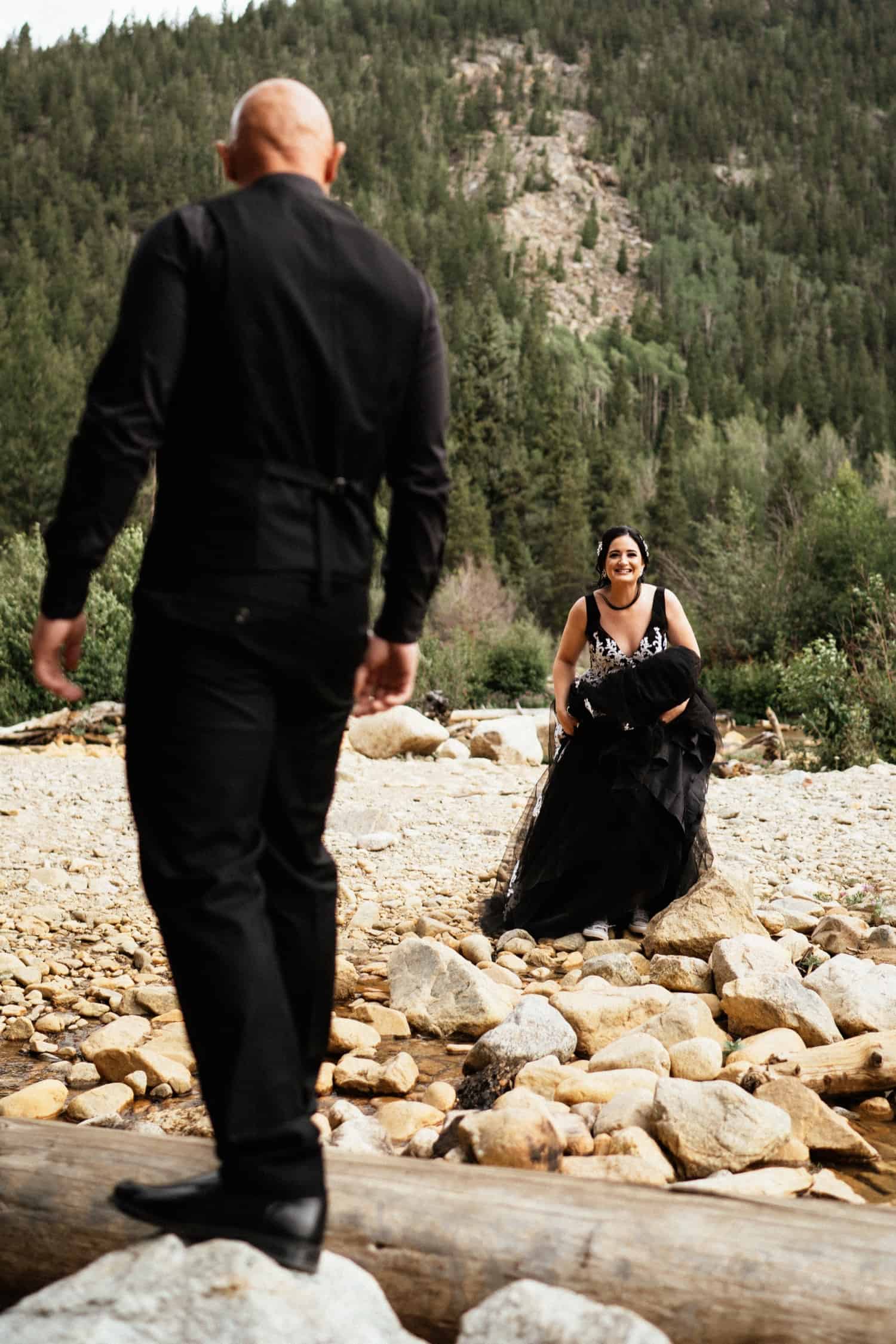 A first look with … a pizza.

A few days before their elopement Jordan texted me and said “I know this is crazy but does anyone ever do … pizza … for their elopement? We love pizza.”. I told her if she wanted pizza we would make pizza happen! On the way out of town Isaiah had picked up two GIANT pizzas which she hadn’t seen yet. When it was time to bust out the pizzas we joked that there needed to be a pizza first look and both the pizza and the first look ended up surpassing all of our expectations! Hahaha!!! It was the cutest impromptu moment in a day that was full of cute impromptu moments!

After our pizza picnic Jordan finished writing her vows in one of the prettiest places you could imagine and then we were off for more exploring! 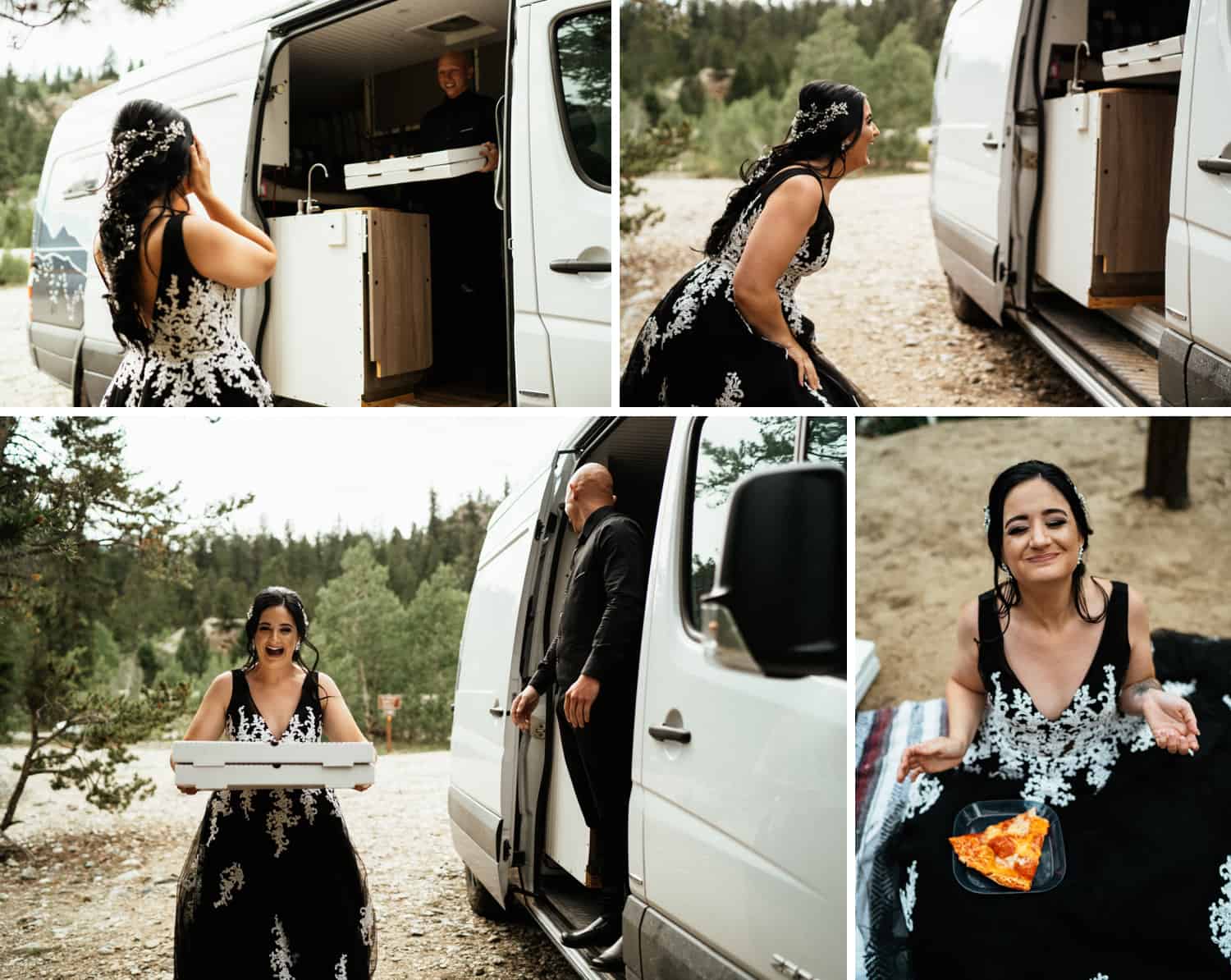 As with many of my elopement couples, these two decided to self-solemnize (meaning they had no officiant). We didn’t have a spot picked out for their ceremony ahead of time and decided to just explore until they found a place that felt like “them” – which ended up being on top of a giant rock, surrounded by trees, with the mountains in the background.

They said some of the sweetest vows I have ever heard and I may or may not have sobbed right along with them. It was such a beautiful moment and PERFECT way to make things official!

After the “hard” part was over we spent the rest of the evening exploring the area – climbed down into a cave (which she rocked even in that gown!), took some pictures, and enjoyed some drinks. They did their first dance as a married couple on a rock bar next to a river in the rain with the sun setting behind them and it was the best way to end the best day.

I had an amazing time adventuring with these two for their elopement. They were up for literally anything and embraced every challenge – from a pandemic to rain to a Class 3 scramble into a cave – that the day brought us. And it was perfect. 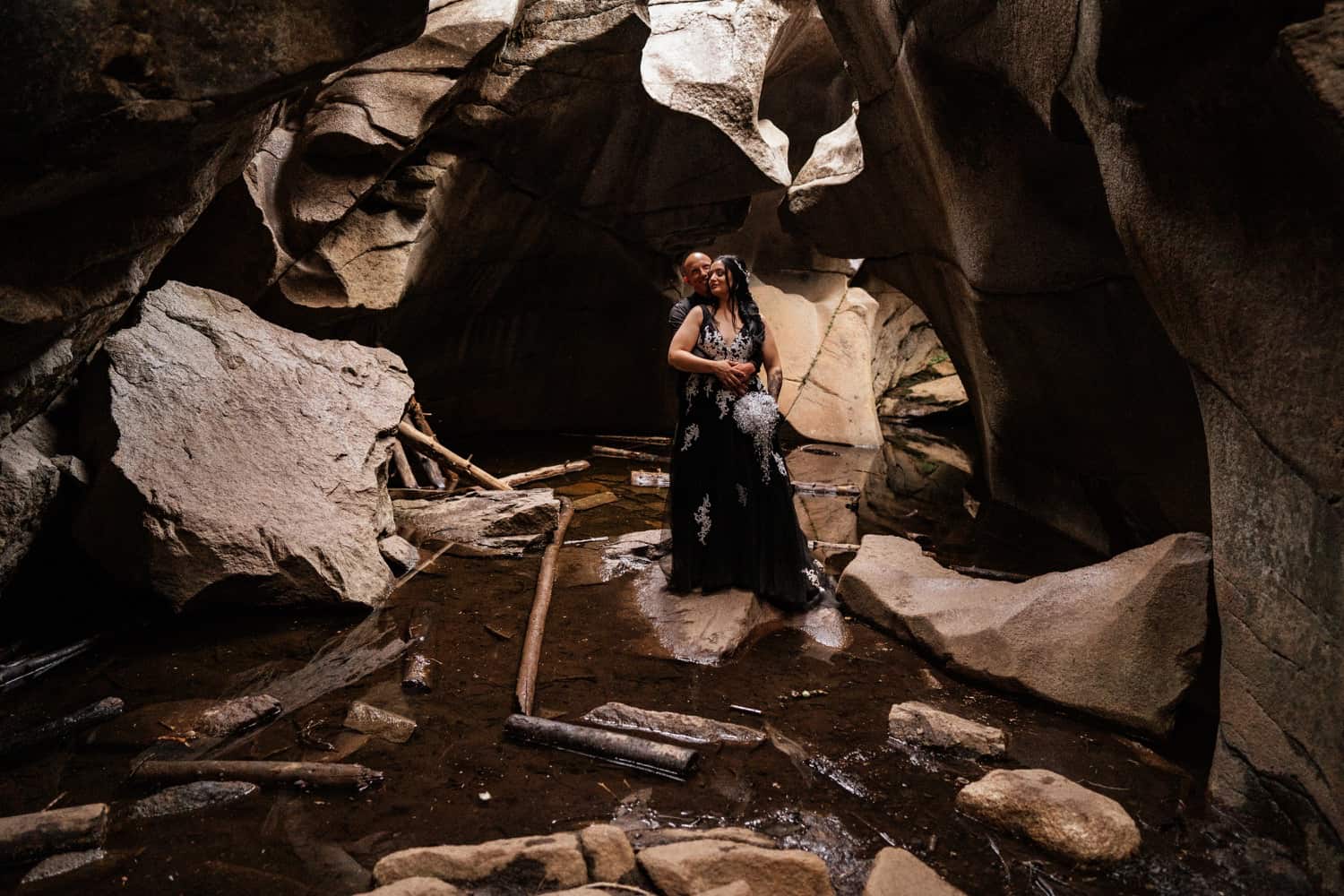 Special thanks to the vendors who helped make this day extra awesome:

If you're on the fence about whether an elopement is right for you, this may just push you over the edge! Reasons to elope - and also one very important reason NOT to.

I'm super active on social media - stay up to date on all that I'm up to, see behind the scenes, and more!