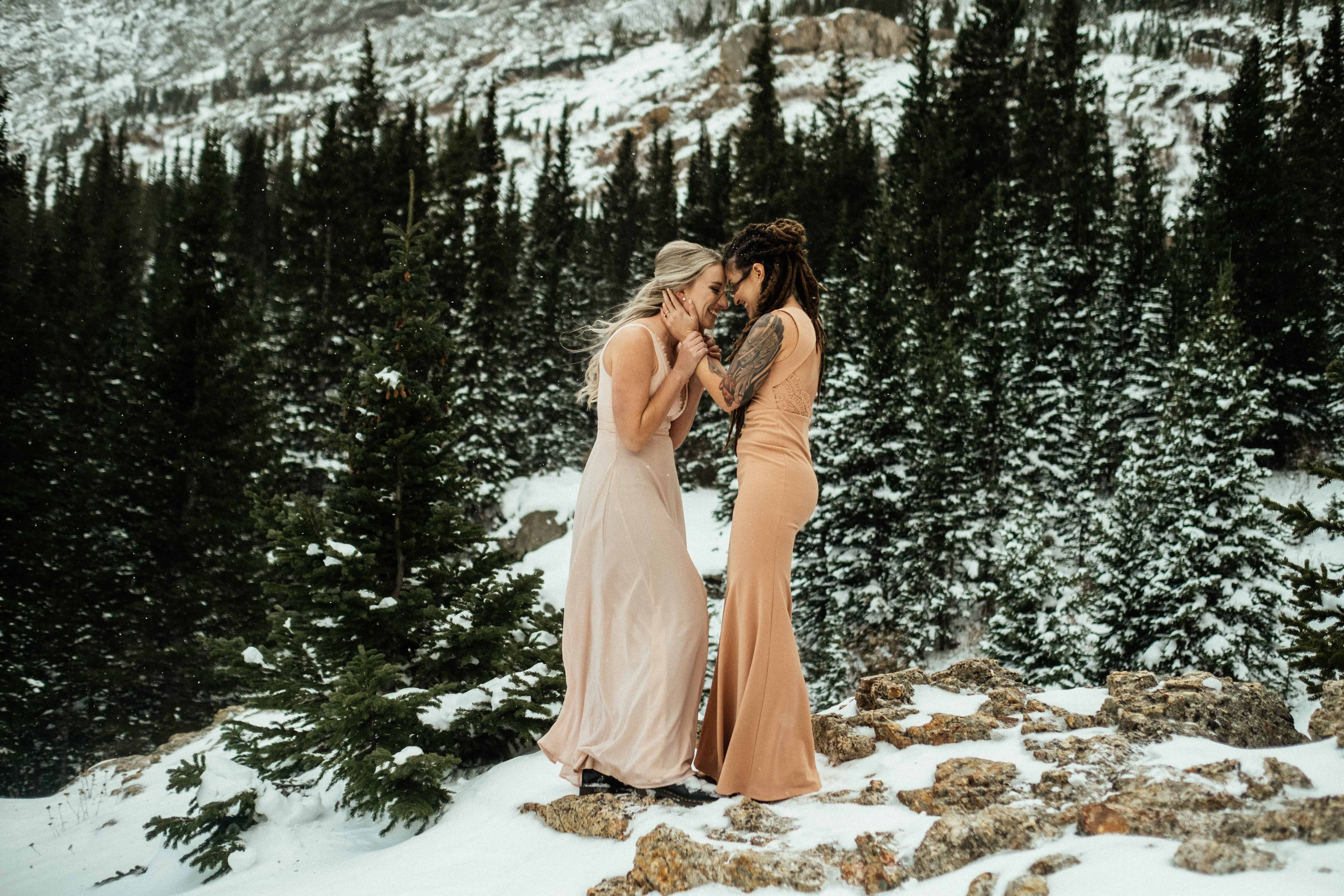 Laura and Katie live in Arizona but have a deep love for all things mountain. When they first contacted me about photographing their elopement they told me that they are obsessed with skiing and travel and didn’t know EXACTLY what they wanted for their day but knew that they wanted it to be a super chill celebration of their love in a beautiful place. And man, their snowy mountain elopement (that ended up not really being an elopement …) delivered!!

When we were finalizing the plans for their elopement they told me that … SURPRISE! … they had already gotten married! Apparently they decided that they just couldn’t wait for the fall to roll around to be married so they ended up going to the courthouse in their town back in the summer. So we skipped the vows (those had already been said!) and spent the afternoon and evening celebrating the hell out of their marriage – which was already a few months old!

Because of an ACL that was recovering from a skiing injury a long hike was out BUT that didn’t mean we couldn’t go explore some wild places! After throwing around a couple ideas for how we could spend the day we settled on one of my favorite little spots in the mountains … and then crossed our fingers for some snow!

They  got ready together at the cute condo they rented and then we all headed out for an adventure! We began the afternoon at one of my favorite little bars in Breckenridge (liquid courage AND warmth!) and then we headed out to explore!

It had been relatively dry in the weeks leading up to this but a storm a few days before dumped several inches of snow, the first of the year, on the mountains. None of us were mad about it. Was it cold? Yes. Did I almost slip right off a cliff next to that waterfall? Absolutely. Was all of it 100% worth it?! A THOUSAND TIMES WORTH IT!

We spent the evening exploring a frozen wonderland, taking breaks to warm up in the car with butt heaters and spiced whiskey, talking about life, and celebrating the fact that they were freaking MARRIED!! Off and on a light snow would start to fall and, honest to god you guys, I don’t think it could have felt any more magical!

Here are some photos from their snowy mountain elopement (that ended up not really being an elopement after all …) day! 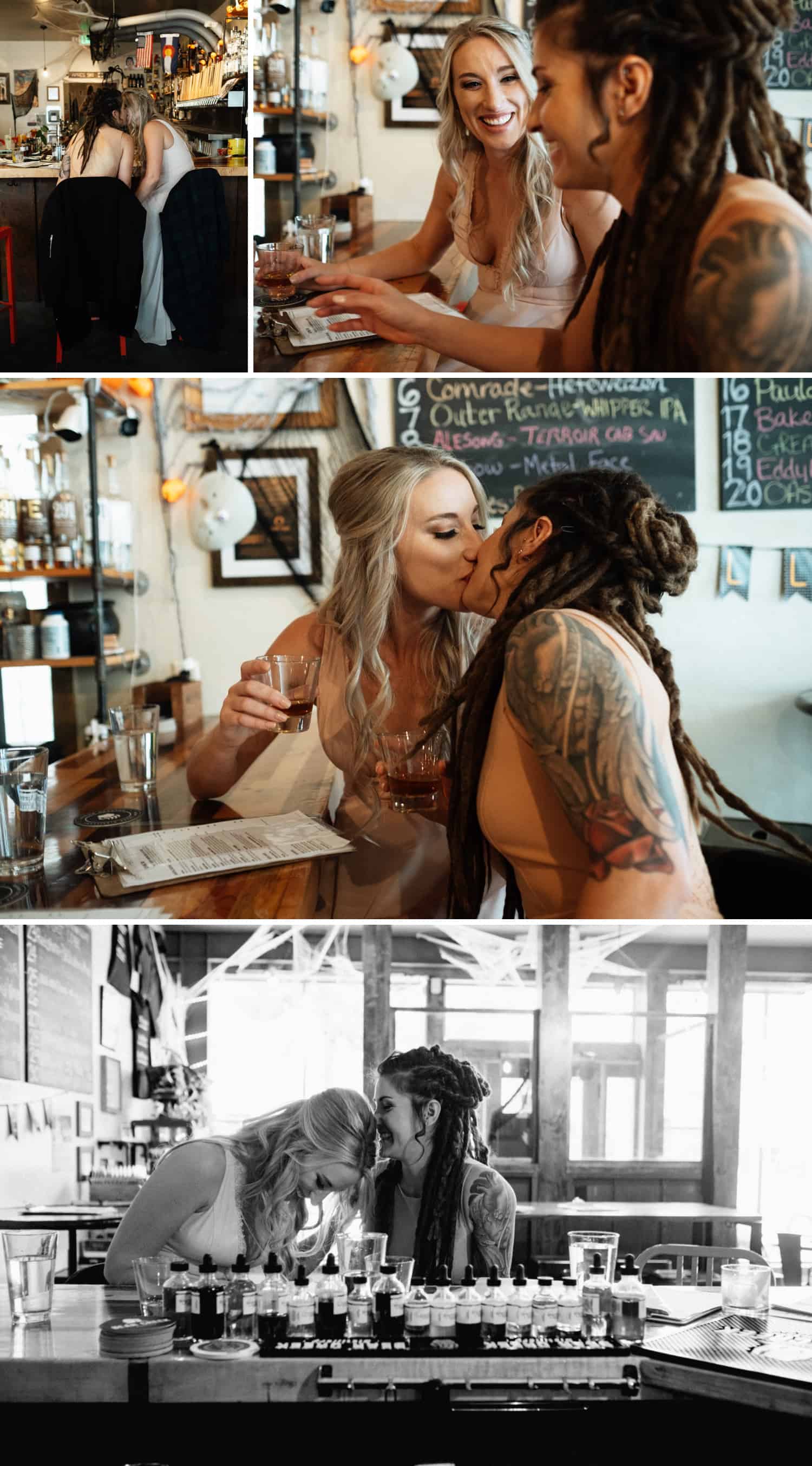 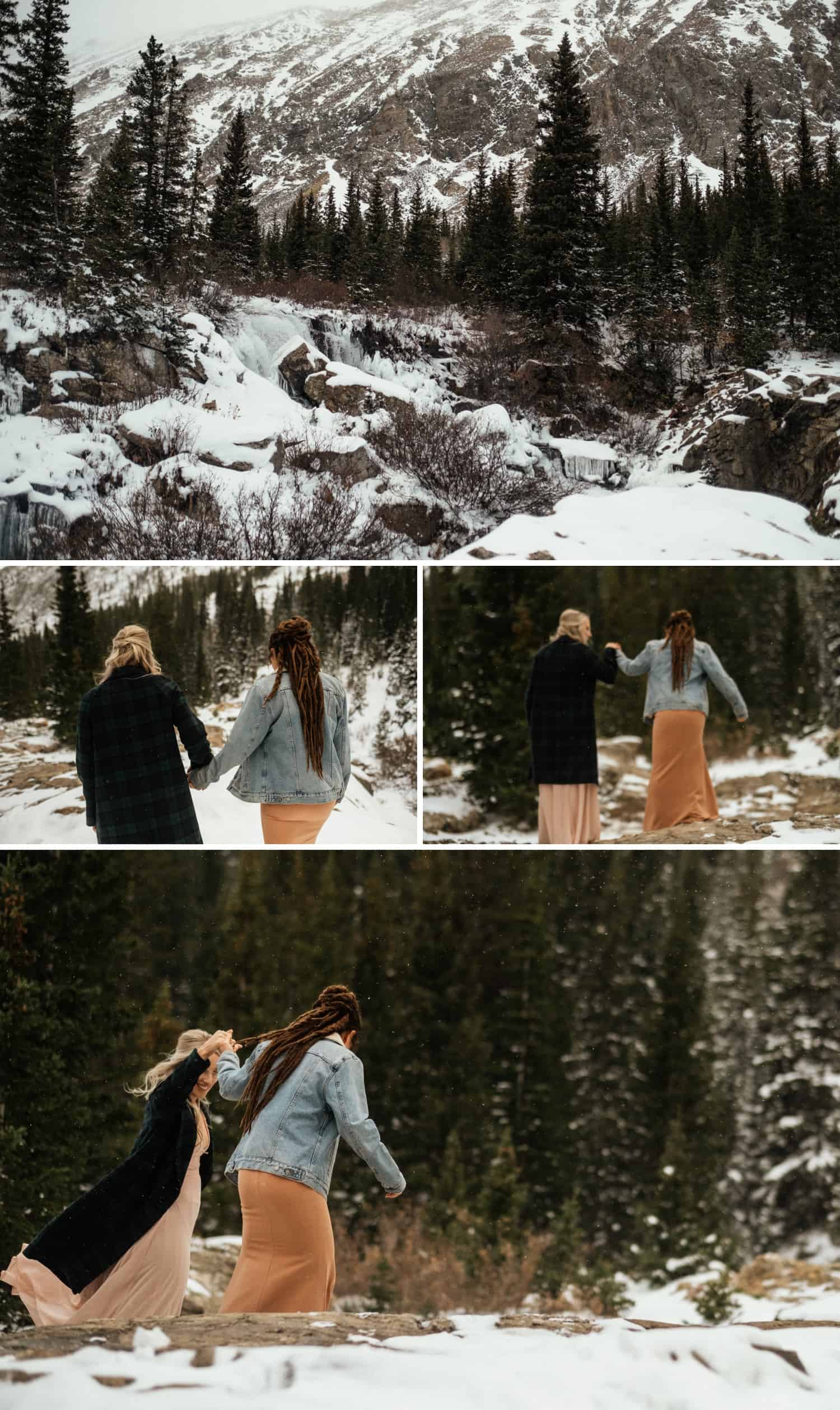 I had so much freaking fun playing at Katie and Laura’s snowy mountain elopement! It was the BESSSSSSST way to kick off snow season (which lasts a looooong damn time around here!). I know everyone loves beautiful, sunny, warm weather but I think there is something so freaking special about couples who embrace the cold and the snow. These two were all about it! Want more elopement inspiration? Check out my blog!

HUGE thanks to Laura and Katie for a super fun evening in a crazy beautiful place! May the upcoming ski season be a good one for all of us! 🙂

Elopements begin at $2500. Weddings begin at
$3800. Every single package includes an heirloom album.

Get in touch and lets chat about your outside-the-box (and off-the-grid!) day.