I'm a Colorado-based destination elopement photographer who helps couples have unforgettable elopements in the Rocky Mountains and destinations worldwide.

As someone who shoots tons of destination weddings in remote places I always joke that the best way to tell if your people REALLY love you is by making your wedding an adventure to get to. NEVER has that been more true than with Kortney and Ben’s Telluride adventure wedding.

Ben and Kortney moved to Colorado a few years ago and as far as I can tell have spent as much time as possible exploring the mountains. When it came to planning their wedding they knew exactly where they wanted to go – and they just needed a photographer to help make it happen.

I remember sitting across from them at my favorite brewery in Boulder, drinking IPAs and talking about plans, and Ben saying something to me like “We really just wanted to make sure that you were down to backpack and camp with us.” As if they even had to ask!

The coolest thing about their wedding was that it just wasn’t the one night and day that I was with them – it was a whole week long adventure. They met up with their friends in Denver and spent several days working their way down to Telluride – stopping to mountain bike, whitewater raft, camp, and hike along the way. By the time they finally made it down to the San Juans they already had some amazing stories under their belt … and there was just one more REALLY big thing to do.

The plan was to hike up to a lake with their friends, camp overnight, and do the ceremony at sunrise. When I realized that it would probably be dark before we got to the lake and I wouldn’t have any time to scout I offered to head up earlier in the day to scope things out. With loaded packs we (my husband tagged along on this one) we slogged our way up the steep trail and made it to the lake with tons of time to kill. I scoped out a spot for the ceremony, caught a few cutthroat trout (you didn’t think I left my fly rod at home did you?), and then curled up in my sleeping bag waiting for the crew to roll up.

It was dark and rainy when they made it up to the lake. I leapt out of my tent, met everyone with giant hugs, took a few swigs from the bottle of whiskey that was making the rounds, and then went back to bed – we had a BIG day coming up!

The next morning I got up in the dark and saw a light glowing in one of the tents. I went to check it out and found Koko and her bridesmaids piled into a two person backpacking tent doing their hair and makeup – it might not have been the most spacious bridal suite I’ve ever seen, but it was definitely one of the coolest!

When the sun came up they got into their clothes, their friends went down to the lakeshore, and Kortney walked down an aisle of wildflowers (seriously you guys it was SO GORGEOUS) and they had the sweetest ceremony next to the bluest water I’ve ever seen in Colorado.

After the ceremony we popped some champagne, took some pictures, and headed back down the mountain – we had one more big adventure planned for the day and we could NOT be late!

When we did their engagement session back in the fall we talked about how we all wanted to the via ferrata in Telluride – and how awesome it would be to do it as part of their wedding day. We were ALL totally on board with the idea and Ben and Kortney made it happen!

With help from the amazing folks at San Juan Mountain Guides they spent the first few hours of married life dangling off the side of a cliff (yes, there were MANY jokes about collecting life insurance …) with most of their wedding guests. IT WAS SO MUCH FUN and such a kick ass way to spend the afternoon – high above Telluride with bridal veil falls in the background and nothing but air below. 😉 Even the people in the group who were deathly afraid of heights absolutely ROCKED the via and I can’t think of a more memorable way to celebrate the beginning of a marriage!

I had an absolute freaking BLAST with these guys and their friends in Colorado’s most beautiful mountains and I can’t wait to get back out that way again! I have some killer ideas for other spots for elopements and intimate weddings in this neck of the woods – I’ll be back sooner than later for sure!

Shoutouts to Daarlarna Couture for Koko’s incredible dress and San Juan Mountain Guides for an amazing and safe experience up on the via ferrata!

Also, huge thanks to Holdfast for making bomb camera holsters that kept my cameras from tumbling 500 feet down the side of a cliff! Here are a couple behind the scenes shots from this one! 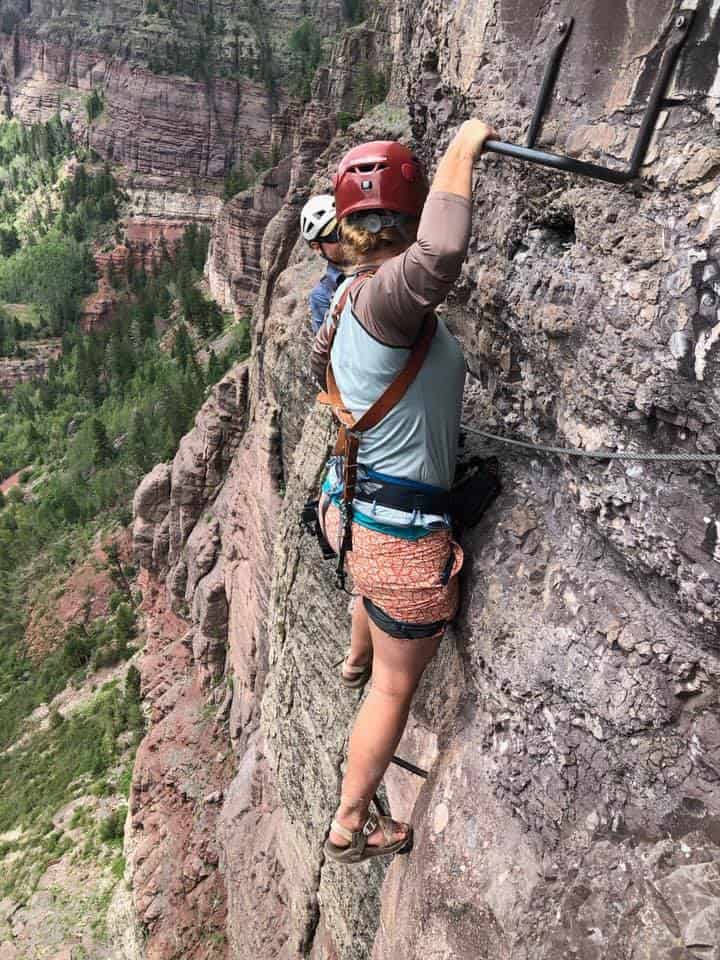 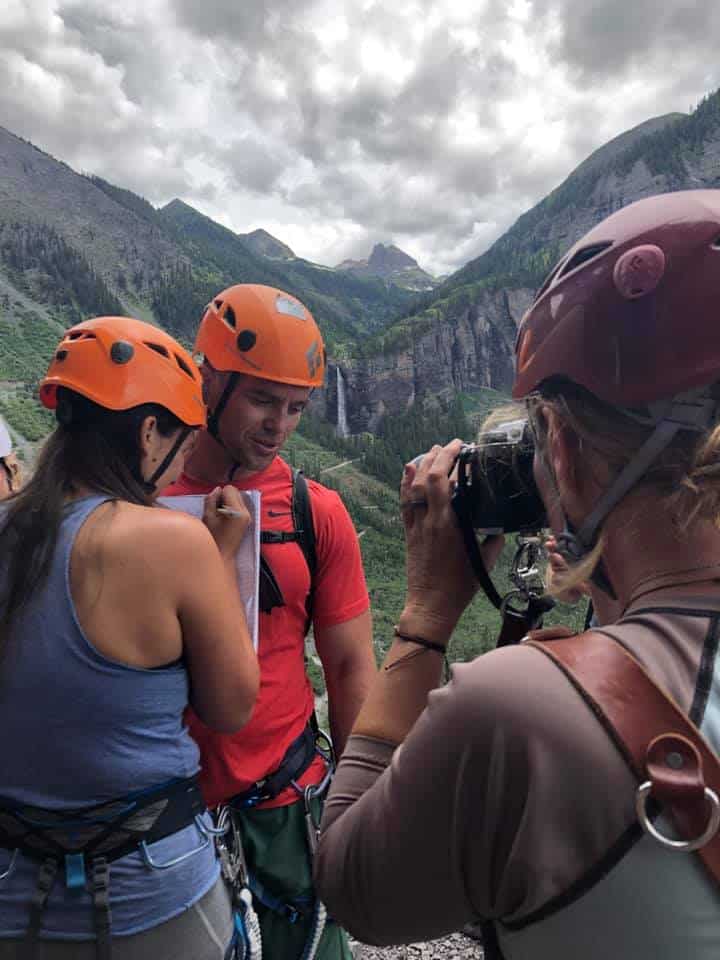 If you're on the fence about whether an elopement is right for you, this may just push you over the edge! Reasons to elope - and also one very important reason NOT to.

I'm super active on social media - stay up to date on all that I'm up to, see behind the scenes, and more!